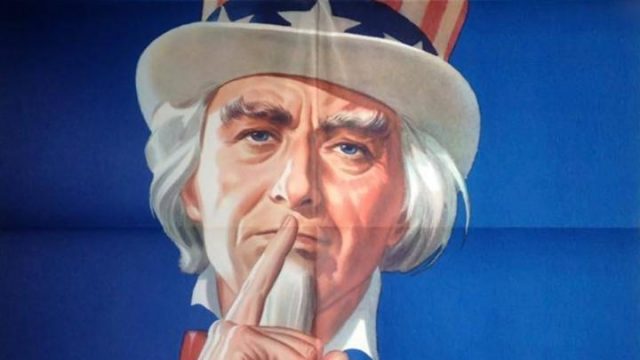 Arts + Literature Laboratory presents Shhh… from February 3 – March 3, 2018. The exhibition presents a collection of WWII propaganda posters as its point of departure and features the work of 24 artists who use “propaganda” or information/disinformation in some way to address and reframe issues present in our current cultural-political climate.

Propaganda posters from the WWII era were produced in prolific numbers and widely distributed throughout the US. They dramatized the circumstances the nation found itself in and persuaded the populous to support its cause lest we fall into the hands of fascist dictators. In the wake of the 2016 presidential election and subsequent inauguration of Donald Trump we find ourselves with an administration that employs deceptive communication if not outright prevarication as a means to expanding the power of a few at the expense of the many. In response Arts + Literature Laboratory began developing an exhibition examining how artists such as Alex Melamid, Allison Yasukawa, Ebon Fisher, Jody Zellen, and others are using notions of propaganda, information and disinformation in their practice. To give voice to a larger community, Arts + Literature Laboratory sought proposals from artists across the country. The exhibition will feature artists from New York to Los Angeles and places between.

The exhibition title, Shhh… is derived from a theme found in the posters that implore citizens to not discuss or share personal knowledge of troop movements, military production, etc. As the title suggests, Shhh… focuses on works that demand an attentive viewer and includes painting, drawing, sculpture, collage, as well as video, photography, performance, objects, zines, and text. Some artists filter and juxtapose public information with personal observations that range from sarcasm to outrage, while others use historical or contemporaneous narratives to exploit and inspire emotional responses. Still others engage us on a cerebral level to consider a thoughtful yet urgent call to action.

Central to the exhibition are the WWII posters; a poignant backdrop that recalls a time when many people believed that modern art could pave a pathway to democracy. Artists of that era assisted the government in its war effort. The posters testify to that but also to a lingering nostalgia that threatens to overlay the truth of what America stands for with a backwash of sentimentality concealing a devious and blatant assault on our institutions. They illustrate an eloquent national spine highly resistant to those wishing to exploit its freedoms.

Jody Zellen and Daniel Rothman’s Spin, 2016, is an interactive video/sound installation that allows viewers to arrange live media headlines into personal compositions while the sounds of media talking heads circulate subtly in the background. With a measured use of materials that reinforce and bring forward the all-to-obvious consequences of biased policy, Holly Ballard Martz’s work By Executive Order, 2017 reminds us that the threshold we cross outside our doors is no different that the one we construct at our borders. Bernhard Geyer’s History of the Art of War, 2017 are humble reflections on the endless cycle of conflicts around the globe. Executed in gouache on cardboard they are like prayers falling on deaf ears, the defeat of materials standing in for the certain nearsightedness of those who see war as inevitable.

Although staged photography emerged as a distinct artistic genre only a few decades ago, staging has been a standard photographic practice from the early days of the medium. For some genres like still life, fashion or nude photography, setting the stage and directing the models are almost intrinsic aspects of the creative process. Photographs belonging to other genres, for instance portraits, may or may not be staged or directed. For this exhibition we are looking for images, which have been constructed to create a unique meaning. We invite works created by artists who, in addition to that of the photographer, also assume other creative functions, such as setting or designing the scene, directing the model(s), sometimes designing the costume and set, or even applying makeup and prosthetics. Staged images, however, do not necessarily have to involve human or nonhuman models as they may rely merely on the arrangements of selected objects into a meaningful scene. 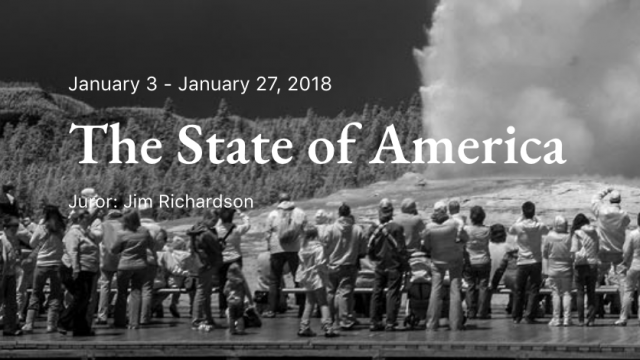 What images reflect your feelings about America today? Some of us are worried about America’s place in the world. The changing climate. The fading reality of the American dream for our family.

Others of us remain awed by the vast beauty of America. The strength and independence of its people. Americans’ willingness to step up to help neighbors in times of crisis.

Regardless of your opinions or your nationality, we welcome images that evoke the broad range of emotions and events of this extraordinary period in United States history. They need not be political — just let your images tell us how you feel about the state of America today.

Photographing the State of America is more challenge than assignment. Beyond attempting to record any part of America at a given time, it asks the photographer to delve into another realm of understanding, one where photographs capture essence, where moments speak of enduring time, where icons become the inquisitors of our shared identity. Many photographers have attempted this alchemy, most notably Robert Frank, of course. To seek that quintessence in this diverse gathering of photographs was my honor and challenge.

I sought something beyond recording, aiming at a collection of images that, taken together, would express something of how we Americans see ourselves, collectively, here in 2017. Technique varied. Included are many genres, from straight documentary to created theatrical scenes, from disturbing portraits to introspective scenes of domestic solitude. What emerges is a disquieting sense of a country not at ease with itself, not sure how or where to see that longed-for rectitude of our national spirit, now slipping away like the half-remembered face of a departed loved one. It seemed significant, for instance, that in an image awash in patriotic fervor a sea of flags served only to fracture the scene into shards like broken glass. And that a street scene of holiday spirit, floating in bubbles (perhaps the happiest picture of the show) should also contain a bomb squad truck.

Whether this is who we really are, or just who we think we are, the effort to see the truth and gather it into collective statement is deeply rewarding. Thank you for letting me be part of this vision.